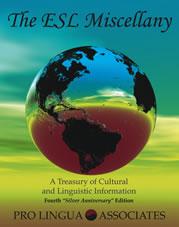 The Metalingusitic Aspect and Miscellaneous Materials

The Metalingusitic Aspect and Miscellaneous Materials

The Purpose and Contents of the Miscellany This book is a compendium of useful and interesting information for teachers and learners of English as a Second Language. Although the book focuses on North American English, it will also be useful to teachers and students of other varieties of English. Teachers will find this book useful as a resource for developing material as they supplement, expand, replace, adapt, or develop from scratch a complete curriculum. This one book does not contain everything that the teacher/materials developer needs to know, but we believe it is the most comprehensive one volume reference available to the lesson writer. In addition to its usefulness in developing materials, this book offers another function as a guideline/checklist for teachers who teach “a little of this and a little of that.” The problem with this kind of eclecticism, of course, is that it is not always easy to know if everything is being covered. This book will not be able to tell teachers everything they need to know about North American English, but it can serve as a comprehensive outline. By consulting the list of Situations, for example, the teacher can rather quickly review which conversational situations have been covered and what remains to be covered. A third use for this book is that many of the lists can be copied and used as handouts. For example, the summary of religions in the U.S. and Canada could be copied and given to the students as the point of reference for a question answer practice or discussion of religion. For that reason we encourage copying of these lists for classroom use. We suggested earlier that students of North American English will also find this book useful, but it is likely that it will be especially valuable to advanced students of North American English who are in need of a one volume guide that will help them determine what they already know and what they should focus their study on. We think this book will be of particular interest to advanced students who are preparing to be teachers of English as a Second Language. The Miscellany is divided into five parts. Parts I and II contain information about the language itself. This information is classified as two major aspects: Linguistic and Communicative. The linguistic aspect contains information that in some way deals with what is commonly called the phonology, lexicon, and grammar of the language. However, this linguistic aspect is not a grammar, but rather a series of lists of words and forms that exemplify some grammar point. For example, under Phrasal Verbs, there will be no rules for the use of these verbs. Instead, there will be a list of separable and inseparable phrasal verbs. In other words, it is assumed that the user will have some understanding of how phrasal verbs function in English. The communicative aspect does not deal with linguistic forms such as “go, went, gone” but outlines ways in which the language is used to send and receive messages. We have included lists of functions such as asking, introducing, telling, etc. Also in the communicative aspect section, we have included vocabulary lists that outline potential topics of conversations and situations, the contexts in which communicative functions and topics of conversation are carried out. In Part III we have compiled several lists that form an outline of North American culture. Each list can be used as the basic data upon which can be based a discussion or controlled conversation about some facet of North American culture. Part III can be used as the basis for an orientation to immigration and resettlement in the United States and Canada. Part IV is a potpourri of information that is, in general, metalinguistic. In other words, the information in this part will help the teacher and the learner facilitate the teaching/learning process. But there is also information that does not fit neatly into any of the other categories and is best labeled as miscellaneous. Part V needs little explanation. It contains some examples of communicative systems that parallel the language itself. Hence, we have called it the paralinguistic aspect. Of greatest interest is a photographic catalog of 61 gestures that are commonly recognized and understood in North America. We have provided titles and minimal explanations for the gestures, but otherwise we leave it up to you, the user of this book, to discuss, compare, practice, and even add to this listing. We will be the first to admit that this volume is far from complete. The information is such that it changes almost as fast as it is updated. As we prepare for the next edition, we welcome your comments and suggestions. In preparing this fourth edition, some of the material from previous editions no longer seemed as relevant and appropriate as it once did. Since we have added new material, it seemed reasonable to drop some, too. However, we know that each topic we have dropped will be missed by some teachers who have found the material, for example, on nursery rhymes, contraception, human and animal body parts, curses, and vulgarities, useful in working with specific students. So that we don’t disappoint these teachers, we are making this information available for free at our webstore, ProLinguaAssociates.com, linked to the ESL Miscellany announcement.

A continuing commitment to accented speakers of American English...and the professionals who serve them.